Aliquid Lacquer is one of my favorite up-and-coming indie brands, as you guys well know. She’s always been an awesome blogger and really puts time and effort into making polish that is both unique and high quality. Her newest collection is for Halloween and is called the Angel In Hell collection- that’s right, based on the Phantom Of The Opera! The collection is also 20% off in her shop right now to celebrate it’s launch, but today is the last day to take advantage of the sale!

As both a book nerd and a musical/theatre nerd, I was super excited when I heard that she was coming out with her collection. I pretty much have the same reaction to the Phantom as the awesome Leslie Knope does (who is basically who I want to be when I grow up).


*cough* Anyways. The Angel In Hell collection consists of six shades total- Corpse De Ballet, Forever And A Day, Maze Of Mirrors, Red Death, The Skeleton’s Ring & Unending Night. I used Out The Door top coat for the photos below with the exception of Red Death- for that I used both Gelous

+ Out The Door. Some of the bottle shots are a little lighter than the actual polish color- the nail photos are more color-accurate. Let’s take a look!

Aliquid Lacquer Corpse De Ballet is described as a ballerina pink with white and black/purple flecks and green shimmer. Two coats. The formula was wonderful, no complaints. I love that this one is such a soft and pretty pink, but the things added to it keep it a little bit punk, too. I think even people who don’t normally like pink might like this shade!

Aliquid Lacquer Forever And A Day is described as a dark teal-grey with green, purple and iridescent flecks and ruddy brown shimmer. Two coats. The formula was great, easy to apply and not too thick or thin. These are the types of polish I feel Aliquid Lacquer always does really well!

Aliquid Lacquer Maze Of Mirrors is described as a full-coverage glitter with silver holographic, black, and blue iridescent glitter, plus silver flakies and silver-blue shimmer. Three coats. The formula was great, the shard glitter came out easily and the formula wasn’t too thick or thin.

I wasn’t sure whether I’d like this one or not and I’m still not sure how I feel about it. It’s definitely unique and a cool idea, I think I’d love it more if it didn’t have the black glitter. That’s just my personal opinion, though- and it really is cool and totally looks like broken mirrors. I have a feeling it may grow on me! Would definitely be awesome for new years.

I did also try using it as a topper (one coat over Zoya Lael) and really liked how cool it looked that way!

Aliquid Lacquer Red Death is described as a blackened rust jelly with red, silver, lime green and yellow glitter and dark red shimmer. Two coats. The formula was great, not too thick or thin and went on easily with no fishing. To the surprise of no one, this was my favorite!

Aliquid Lacquer The Skeleton’s Ring is described as a cream-colored polish with gold flecks and green shimmer. Two coats. The formula was really good! Being so light, I was expecting a potentially troublesome formula but it went on really smoothly- a little streaky on the first coat but great by the second. I probably could have gone for a third to make it completely even under these lights, but two was enough in person. 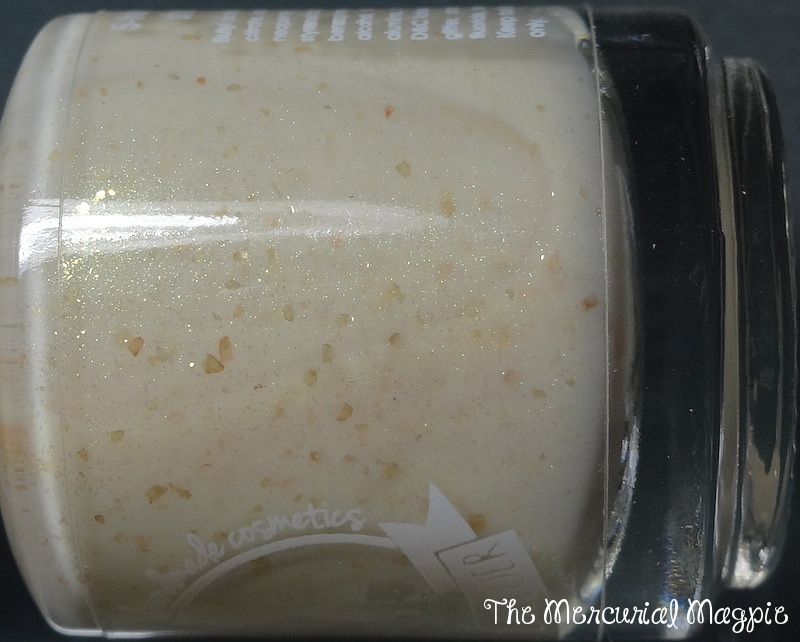 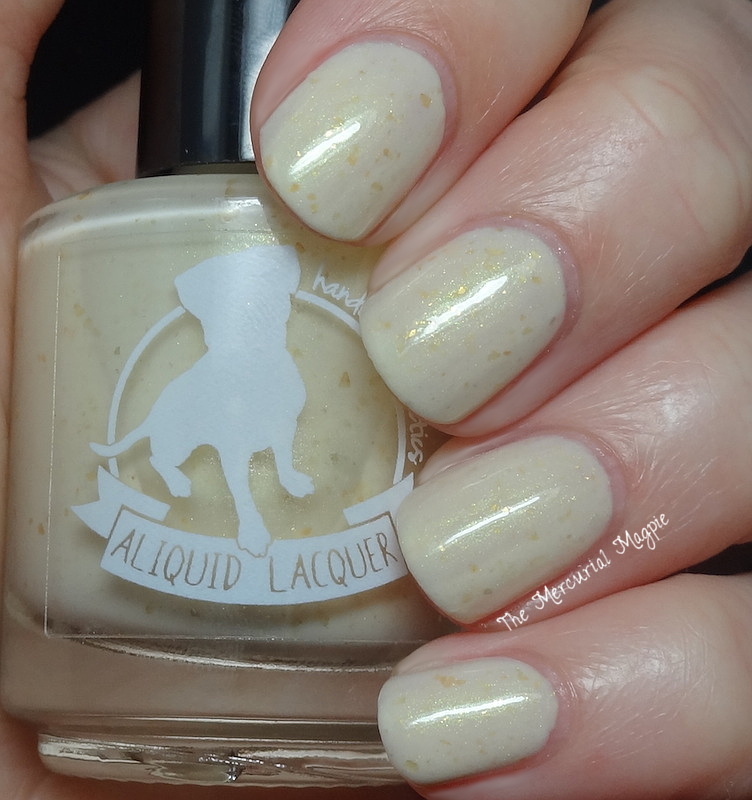 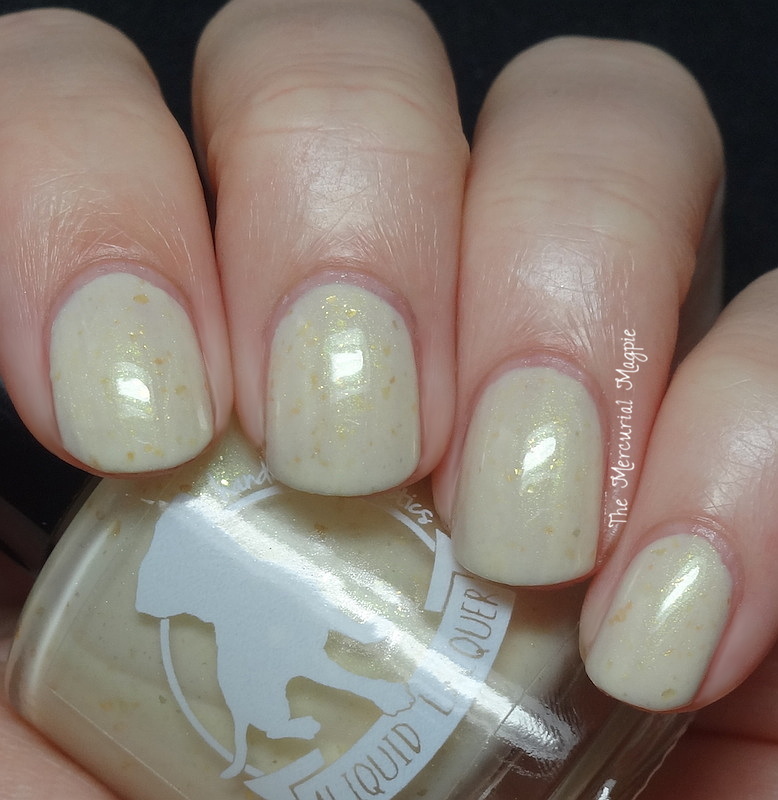 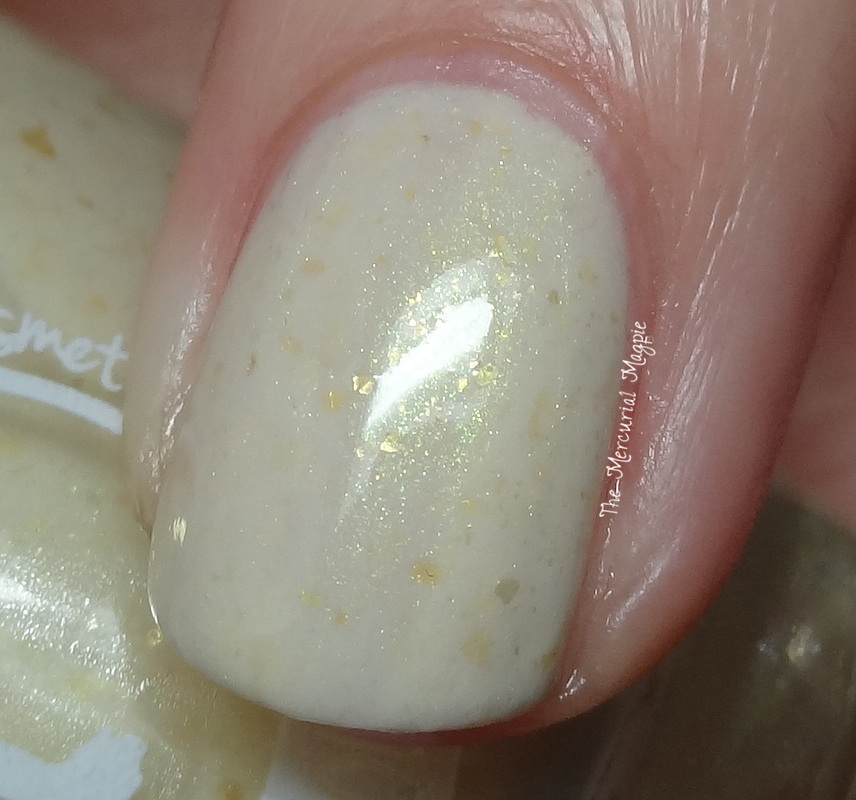 Aliquid Lacquer Unending Night is described as a blackened blue-purple linear holographic polish with copper and red sparks. Two coats. The formula was wonderful, not too thick or thin and easy to control. This shade is gorgeous and the sparks make it interesting and unique among other vampy purple holos!

She also has an incredible lip balm that you guys have seen me review before. Each collection she usually puts out a new scent or two, and this time she sent me her Pumpkin Cheesecake balm. It is like fall in a bottle, it smells incredible! Her balm is really nicely priced and works really well, I totally recommend picking one (or three) up with your order.

Overall, the Angel In Hell is another really incredible collection! I love that she’s putting out things that are so unique and I’m always so excited to see what she’s got in store for the future. These are available now in her shop, so head on over if you want to pick any up- and remember, today is the last day to grab these (full sized) for 20% off!

What do you think? Have you tried this brand yet? Which of these shades is your favorite? Let me know in the comments!