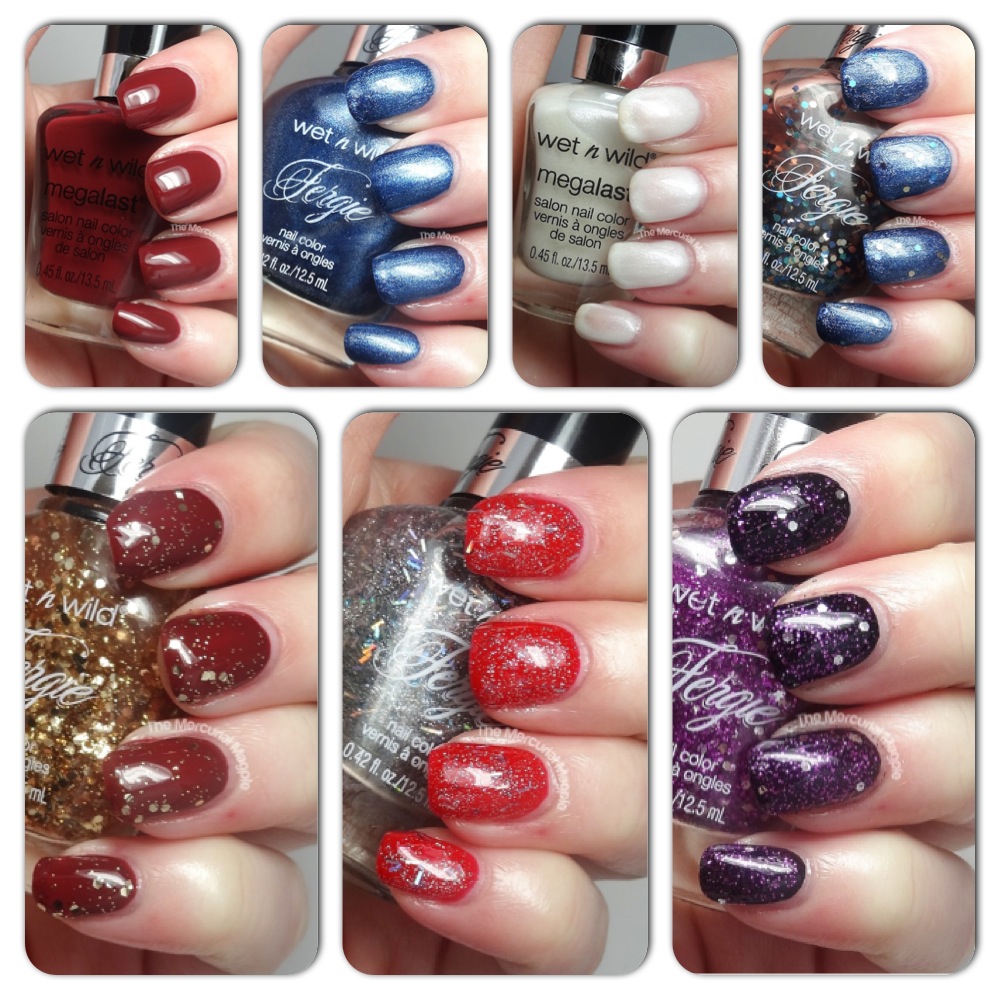 Hi, everyone! So, I’ve always loved Wet N Wild as a drugstore brand, especially their eye makeup which I tend to find is really, really good quality for the price. I have a few of their polishes as well that I love and so I was very excited to have the opportunity to review some of their glitter topcoats and cremes/shimmers for you guys today! I was sent Haze of Love, Break The Ice and I Red A Good Book from the Megalast Line and Glamorous, New Years Kiss, Kaleidoscope Eyes, Blue Eyed Soul, and Take The Stage from the Fergie line.

Before we begin with any of the details, I’d like to talk about the brush on these polishes. Similar to the Sally Hansen wide brush, this brush is large as well. This can be a polarizing thing- I personally prefer the control a smaller brush gives while many people enjoy the large brush as once you’re used to it you can polish your nail in one swipe. So, just something to note! For all the below polishes, I used one coat of Seche Vite to top them.

Let’s start off with Wet N Wild Megalast Haze of Love. This is a burnt/brick red creme that is a really gorgeous shade. The formula was a bit on the thin side, so you have to be careful to wipe off the brush before polishing so that you don’t flood your cuticles. It was nearly opaque in one coat but I did two just to be sure.

On top of that I put one coat of Wet N Wild Fergie Glamorous, a gold glitter topper. I think this topper is super pretty, especially over red! The formula was actually a bit on the thin side (unusual for a glitter, usually they’re on the too-thick side) so again you have to be careful so that it doesn’t run everywhere. The glitter was still suspended nicely though and so pretty once on the nail! This was my favorite out of them all!

Next up is Wet N Wild Megalast Break The Ice, which is a shimmery/pearly white. The formula consistency was better on this one, not too thick or thin. It did not self-level well. It does go on pretty sheer at first but built up to near opacity in three coats, still a little bit of visible nail line. I don’t usually have the patience for more coats than that so in the future I’d probably add one or two coats of it over a white base! I think it would also be nice to do one or two coats for a base for a french manicure to give it a little bit of shimmer. It’s quite pretty, I think it’s perfect for winter and looks similar to freshly fallen snow.

Next is Wet N Wild Megalast I Red A Good Book. This is a beautiful true, bright apple red. This was perfectly opaque at two coats. Like the others, it is on the thin side so be careful to wipe the excess off your brush before applying to avoid flooding the cuticle. I would also be very very careful about letting this one dry entirely before topcoating it with anything else- I used a glitter topper below after my normal layer dry time (about 2 minutes) and it stained the base of the topper a bit! 🙁 I’m also a giant stupid idiot and I just realized now that I forgot to take pictures of it on it’s own! But you can see it under one coat of Wet N Wild Fergie New Years Kiss in the below photos.

Now, I’m not the biggest fan of bar glitter (unlike my friend Amy over at Sloth Nails– she’s the biggest bar glitter apologist that I know!) but I don’t mind it so much when it’s mixed in with other small glitter such as this. It’s also holographic, which is a really neat effect! I liked this one a lot more than I thought I was going to when I saw the bar glitter!

Next up is Wet N Wild Fergie Blue Eyed Soul. This is a gorgeous blue with small silver shimmer. The formula was actually really good, not overly thick or thin and I used one coat of it for the photos below. It was super opaque and shimmery, really, really pretty. Polishes of this particular finish can sometimes be brushstroke-y but this one wasn’t at all, I was quite impressed! Ignore the weirdness on my index finger, I’m an idiot who must smudge at least one polish a swatchathon!

On top of that I used one coat of Wet N Wild Fergie Kaleidoscope Eyes. I’m not sure if the glitter bled in the bottle or what, but the base was tinted a weird brown- when swatching it comes out clear still, just thought I’d note that. I think this one was probably my least favorite of the bunch. The formula itself was fine, not too thick or thin but the glitters did not want to come off of the brush at all! It was really hard to get more than a few on the nail at one time. I suppose you could wait for each coat to fully dry and try again on the next one but I don’t feel like you should have to do that for a glitter topper.

Last but not least is Wet N Wild Fergie Take The Stage, a glitter topper similar to Glamorous but instead of gold, it’s silver hexes and tiny purple glitter! I looked up swatches of this online and it seemed most people used it over purple or pink, so I decided to go hardcore goth and put one coat of it over black! I really loved how that turned out! The formula was a little thin so again, just be careful of how much is on your brush but the purple glitter glided on easily. Cleaning up my edges was difficult though, the tiny purple glitter did not want to go anywhere! The silver hexes did kind of want to cling to the brush so they were a bit harder to get on, you might have to pass your brush back over the nail a few times while pressing down to get them on there.

Overall, although I do have some criticisms of the formula on a few of these, I still think Wet N Wild is a great budget brand when you consider how inexpensive these tend to retail for. You just can’t beat that when you’re just starting out in the world of polish or on a strict budget. What do you think of these? Let me know in the comments! Also, be sure to check out Wet N Wilds website & like them on facebook to keep up with new releases!