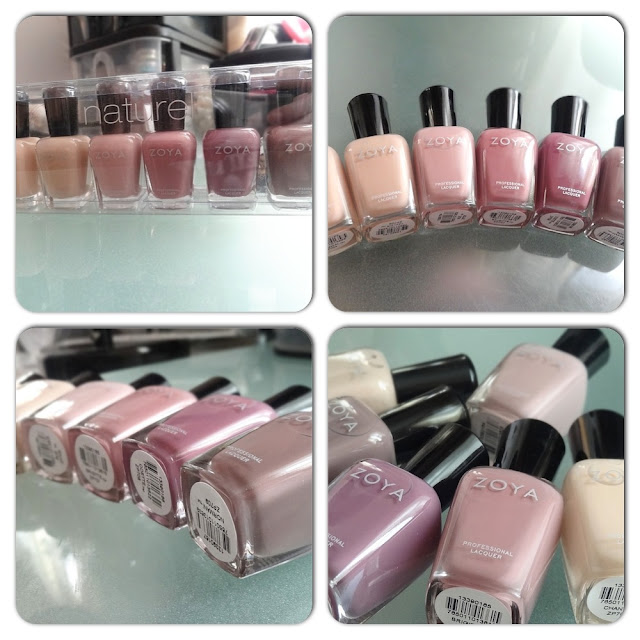 I’ve got some really exciting stuff to share with you today! The Zoya Naturel Collection is going to be released online January 1st, 2014 but I’ve got a sneak preview of the shades for you today (EDIT: Zoya is awesome, they made them available now)! The polishes in this collection are Chantal, Taylor, Rue, Brigitte, Odette, and Normani. These will retail for $9 each and Zoya describes the collection like so:

The natural nail only better… The Zoya Nail Polish Naturel collection masters delicate tone on tone color with six new, full-coverage (opaque) neutral nudes with a pink undertone, that can be worn beautifully alone or stunningly together to create modern tonal accents.
The Look: It’s not about matching – it’s about coordinating colors with slight tonal differences to create interest.

I’ve got six awesome shades to share with you today, along with some nail art using them towards the end, so let’s jump right in! I used two coats of the polish with a top coat of Out The Door for all of these photos. The formula was the same on all of them- slightly thin/watery but not in a bad way, you just have to be careful not to get too much on the brush so that you don’t flood your cuticles. I greatly prefer this to some of Zoyas thicker older cremes (I’m looking at you, Blu!), I was pleasantly surprised by the formula! I always love how Polish Hound does a bunch of bottle shots of her Zoya polishes, so here are some inspired bottle shots!

We’ll get started with Chantal, which is described as a french vanilla cream:

Next is Taylor, which is a light toffee cream (this & chantal are very similar):

Rue (anyone else think immediately of the hunger games? come on Zoya, let’s have a Katniss shade next!) is a boudoir blush cream:

Brigitte, which is described as a bombshell mauve cream:

Odette, which is a sultry maroon cream:

And last but not least, Normani, a sable mauve cream:

All gorgeous, subtle shades. My personal favorites were Brigitte and Odette. I also got a request on instagram from @themisspw asking if I had any friends with other skintones to swatch these on too! Unfortunately I don’t really have any local polish friends but my boyfriend is Filipino and he graciously agreed to help us out!

It was actually kind of funny, after he agreed he was acting kind of sad as we were getting ready to go do them, and I said to him, “You know, gender norms are stupid, there’s nothing wrong with you doing this.” and immediately he said, “Oh, no! That’s not it! I’m just bummed ’cause I can’t play my (computer) game until we’re done!” Haha! What a great guy, right? Anyways, we did this a little quickly so please don’t judge his cuticles or our application! We also did two shades at a time.

First up is Chantal on the ring & pinky and Taylor on the middle & index (these two are very, very similar):

Next is Odette on the ring & pinky and Normani on the middle & index:

And last is Rue on the ring & pinky and Brigitte on the middle & index:

I think Rue & Brigitte in particular are very flattering on this skin tone! Normani, too. Now,  you know me, I love doing swatches to show you guys polishes, but my other love is nail art, so I had to do some combos using these great shades! Especially the way this collection is marketed with them suggesting using them together, I totally had to!

The first thing I did was create a sponge gradient using Rue, Brigitte and Odette:

I then tried my first ever half moon manicure, using the binder page guides. I used Brigitte for the base and Odette for the (half) moon. This turned out okay- not super proud of it but hey, it was my first try!:

Next I did three different combos of stamping (come on, you guys knew I was going to stamp somewhere in this entry, right?)! The first was using a base of Taylor, with Rue as the stamping color and a design from the Moyou London Sailor 07 plate:

Next was using Rue as a base and Brigitte as the stamping color using a design from the Messy Mansion MM06 plate:

Lastly, I kept it simple for what I’m currently wearing, which is Odette with a coat of China Glaze Fairy Dust (you guys know I put this polish on top of everything!):

Want to get some Zoya polish of your own? You can find their website here, (the specific collection is here) and make sure to also keep up with their social media by following them on Facebook, Twitter, Pinterest & Instagram! Interested in seeing more nail art using Zoya shades? Check out my Zoya tag for the blog to see more!

(And while you’re here, don’t forget, I’m also part of two other giveaways that are ongoing, check out the multi blogger/indie maker giant holiday giveaway here and the jingle all the way giveaway here!)