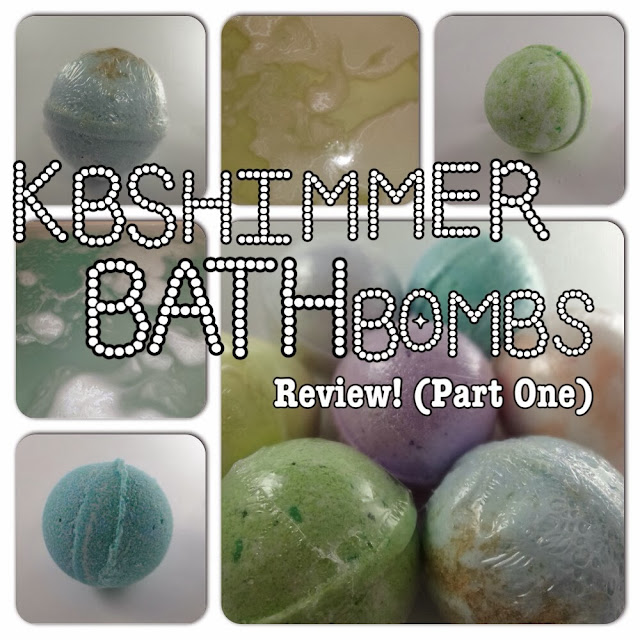 I’m a huge fan of baths for relaxing (after all, I am part mermaid!) and one of my favorite things to do is to use bath products like bubble bath, bath salts & bath bombs! So when I made my last nail polish order from KBShimmer, I decided to try out her bath bombs as well.

What is a bath bomb? Well, they vary from company to company but they are usually packed full of epsom salts, oils, butters and fragrances. Once dropped into your bath, they typically fizz as they dissolve and most will turn the water in your tub a nice color and make the water feel really soft. They usually have a really nice fragrance that hangs around on your skin & the oils make your skin super soft and oily but in a nice way.

The main reason for that was the Blissful Bath ones had stuff in them that was not so great- particularly one that had little lavender seeds (supposed to be buds but that is not what I got) that just stick to you everywhere and look like little bugs. Yuck. But if those things were removed, their effect on the water is about the same as the Lush ones and they do still have a nice fragrance. These retail on their site for about $5 a piece, mine were purchased on amazon where they are $6.

The Lush ones of course are my favorite. Each bomb is different, some have cool things inside, some do interesting things as they are fizzing out and some are just really, really pretty. To be honest, though, I don’t really care if the bomb does something cool- while I’m watching it, all I want to do is get in the bathtub already! So the big thing that sets Lush apart doesn’t matter all that much to me. And at $6-7 each, I was interested in trying out a less fancy bomb for less money if it had close to the same end result as the bombs from these two companies.

So, the bombs from KBShimmer seemed to be a safe bet to try. They were only 3$ each and there was a large selection. The bombs I purchased were relaxation, paradise, lilac, lavender, lemongrass, southern belle and dragonfly mist. I’ll be reviewing three in today’s post.

First, I’m going to talk about the stuff that applies to all three of the bombs, then I’ll get into the specifics. Shipping was quick and nothing was broken during transit, which was nice. I HATED the shrink wrapping on each individual bomb, though. They were really difficult to cut open because they were wrapped so tightly. When I order from Lush, they are also shrinkwrapped but they always have a big corner piece of plastic that lifts off enough to be able to easily cut it off and pull off the rest of the plastic. These did not. What sucks about that is you basically end up having to almost cut part of the bomb itself just trying to get the damn thing open! I understand the shrink wrapping helps in shipping and to keep them together, but it needed to have more of a lifted corner that was easy to cut.

They were also much smaller than the bath bombs from Lush or Blissful Bath. I wish I had thought to get a size comparison photo of the two next to each other, I’m sorry! But I did take a photo of one of the bombs in my hand, which you can contrast to these photos of a lush bomb in my hand (sorry for the instagram collages, all I have right now!):

KBShimmer notes that these are specially formulated so that your bathtub does not become slippery after use. While that is a good thing, I thought the lack of oil was really apparent. My skin did not feel nearly as soft as it does when using the other bath bombs. The water didn’t feel as nice, either. After a few minutes in the bath, it just felt like the water was dyed & there was a nice smell (on some of them…more on that later) but it didn’t feel like using a bath bomb, at least compared to the others. I think the size of the bomb might have played a factor unfortunately. 🙁

What was nice about them was there was no residue left on the tub- some of lush’s more pigmented bombs can leave a little ring around it. It doesn’t stain but you do have to wipe it off. These didn’t do that at all.

First up is Relaxation. Here’s KBShimmer’s description of the bath bomb:

Relaxation is the perfect scent to help you de-stress and unwind. Lavender and Sage combine with soft notes Peppermint and Star Anise to round out this dupe of a popular B&BW scent.  Great for men and women alike.  Pop one in the tub, and enjoy a long soak while this scent eases your worries away.

I’ve used stuff with the B&BW scent before and this was a great dupe! Unlike some of the others, the scent on this one really hung around for a good amount of time and it smelled soooo good.

Late at night, when the water cools and the moon is high, I can almost imagine dragonflies dancing through the sky.  The soft floral scent, a whisper of moss, fragrant herbs and the water itself combine to form this soft musky scent.

You may notice that I only have one photo of this one, why is that? Well, again to the damn too-tight shrinkwrap! I could only cut a tiny strip out of it, and when I went to unwrap it the entire thing crumbled, getting all over my floor!! Luckily I was near the bath that was filling up so I got most of it in the tub, but of course I didn’t have my camera ready. I was REALLY disappointed that this happened. It’s not just a minor inconvenience, the shrink wrap is way too tight and it ruined this bomb for me.

As far as the bomb itself, the scent was incredibly subtle. I could barely smell anything and it faded away very quickly.

Finally, we’ll talk about Paradise. KBShimmer describes it like this:

Fresh squeezed limes, sweet pineapple, zesty orange and lemon combine with soft scent of gardenias to form this bubbly scent. I can almost imagine a frosty drink in my hand while lounging on the beach enjoying the ocean view. Ahhh, Paradise!

The scent of lime was really strong and pleasant! What I typically do is use the bomb, note what I smell & then compare to the description afterward so that I’m not influenced in it by any way. I caught the lime & citrus-y scents in this immediately! It was very pleasant and lasted an okay amount of time, not as long as Relaxation but didn’t fade away right away like Dragonfly Mist did.

So, that’s it so far! Would I repurchase these? Honestly, probably not. I’d rather spend more to have a really great, luxurious experience once in awhile as opposed to using these more frequently but having just a so-so experience. Of course, this is just my own opinion, everyone is different in what they like about a bath experience so I’m sure these are great for a lot of people!

I still have some left to review for you guys, so there will be a part 2 eventually with lilac, lavender, lemongrass, and southern belle.