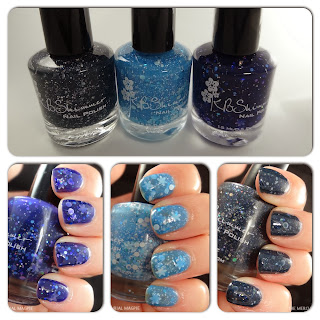 Hey, everyone! I haven’t been into polish very long, but in this short time KBShimmer has become one of my favorite indie brands! Her polishes are affordable & excellent quality. I previously reviewed some other shades here. I was blown away by her winter collection and although it was hard to narrow it down I ended up purchasing Snow Flaking Way, Snow Much Fun & Will Yule Marry Me, which I’ll be sharing with you today! I also purchased a ton of her bath bombs which I’m excited to try out! I’ll be reviewing those in a future entry although it might take awhile since I want to review a few at a time. 🙂

First up is the one I wanted most, Snow Much Fun. KBShimmer describes it as:

This light blue jelly sparkles with light blue holo glitter, white glitters in several sizes and finishes, a sprinkling of micro holographic glitter, and of course, white snowflake glitter. Best in 3 coats or 2 coats over I’d Rather Be With Blue.  Please note, the snowflakes are large and a heavier glitter, and though I added a large amount, there might be some fishing required to get multiple flakes on each nail.

I used 3 coats for the below photos with a top coat of Seche Vite. I did have to fish for some of the snowflakes- I would say I got half on my brush, half I pulled out with a toothpick. The formula was great otherwise, and of course that’s to be expected with large/heavy glitters. They did stick up quite a bit on my curved nails, however. If I were to actually wear this out I would have probably applied a coat of gelous to fully smooth it out.

Next up is the second snowflake glitter polish, Snow Flaking Way (I love these names, by the way!):

Being a Minnesota native, living in Indiana has made snow all the more magical, as this far south, snow is not covering the ground at all times during winter.  This polish is an ode to those midnight flurries that covered the cars each morning.  Sliver holographic snowflakes are set in this deep indigo purple jelly base.  Violet and sky blue holographic glitters add depth and sparkle.  Please note, the snowflakes are large and a heavier glitter, and though I added a large amount, there might be some fishing required to get snowflakes on each nail.

I again used 3 coats for the photos as well as a top coat of Seche Vite. I didn’t get any of the snowflakes on the brush with this polish, I had to fish them all out! I wonder if it’s a difference in the base or formula? Not sure. Other than that the formula was great. It’s more purple than it appears in my photos, they were pulling very blue.

Last up is Will Yule Marry Me?. I debated on buying this one for awhile but finally chose it because I liked how it could be worn not just in winter! It’s described on the site as:

Christmas Eve holds a special place in Chelsea’s heart as that is when she got engaged!  To represent that event, Chelsea want navy blue creally with sparkling silver holo glitters.  Both circle and hex holo glitters give this polish its sparkle and shine.

I was actually surprised how much I loved this one! Formula was great, I used two coats with a coat of Seche Vite on top for these photos.

That’s it for now! I love these shades and may eventually need to pick up a few more from the collection. What do you think? Did you pick up any for yourself? What’s your favorite winter polish (in general)?