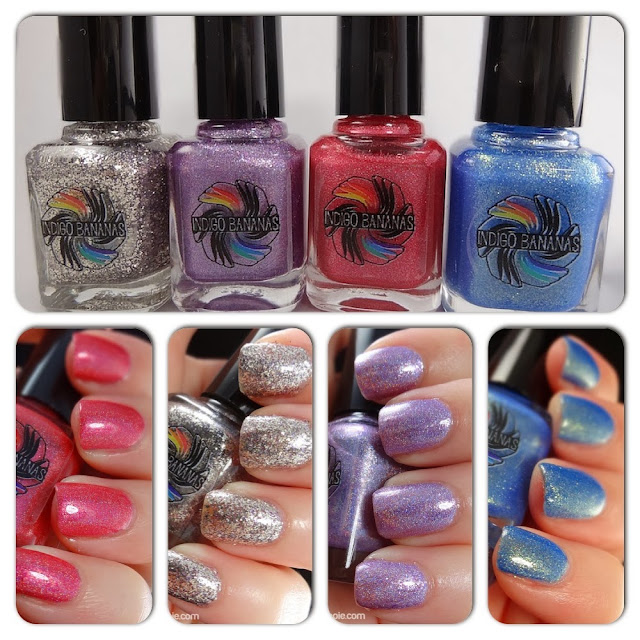 First off, congratulations to the winner of the indigobananas giveaway, Melanie Snyder! And everyone else, don’t worry, I’ll be having another giveaway soon, the post should be going up tomorrow so make sure to follow me and stay tuned!

For today’s post, I’ve got four beauties to share with you from Indigobananas‘ recent collection: Great Scott!, Hope, Moonlight (Clair De Lune) & Wise Up, Janet. Since the formula on three of them is the same (Moonlight is a different finish), I’ll talk about it first. I know I’ve gushed about Indigobananas’ formula plenty before, but I must again. Indies can be so hit or miss but her formula is always perfect, not too thick, not too thin, applies easily and no issues with dry time.

We’ll start with Great Scott!. Her shop says this:


‘Great Scott!’ is a medium blue (‘jeans’ blue, is what I like to call it) heavy fleck polish with strong green-gold shimmer, and scattered holographic microglitter. This polish glows strongly blue in the dark (3 coats as shown)

I used three coats for the below photos, it was pretty opaque at two but I didn’t want to chance it under the bright lights. I also used one coat of Seche Vite to top. This polish is amazingly beautiful, the gold is even brighter/more sparkly in person, my camera couldn’t quite handle it!

And the cool part!, it glows! It charged up while I was taking the above photos and looks like this in the dark:

Next up is Hope, which was made for Breast Cancer Awareness and has a portion of it’s sales from October donated to charity, which I think is pretty neat.

I used two coats for these photos as well as a coat of Seche Vite to top. It’s actually a little bit more holo in person, my camera wasn’t picking up too well on that for some reason.

Next up is Wise Up, Janet.

“Wise Up, Janet!’ (~~I told you once, I won’t tell you twice~~) is a heavy glass fleck based linear holographic polish that is lavender leaning lilac (pink based lavender) that has a strong silver flash to it. The effect is a linear holographic metallic foil.

Indoors this polish is almost a silvery lavender/lilac chrome with pink, blue and silver flecks. Outdoors it’s holographic and the pink and blue flecks pop out even more.

I used two coats for the below photos & a top coat of Seche Vite. Like Hope, it’s more holo in person but my camera was having a hard time picking it up.

And last up today is Moonlight (Clair De Lune).

‘Moonlight’ (Clair de lune) is a super shiny, real silver flakie based polish that has purple, black and holographic microglitter in it – the effect is super silvery, metallic and smooth but with an interesting visual texture. Very chromelike indoors and very sparkly in the sun/outdoors. (Part of a duo set with “Earthshine (clair de terre)”, a set inspired by Offenbach’s opere ‘Le voyage dans la lune’ which is in turn based on Jules Vernes’ ‘From the Earth the Moon’.)

**One coat of this is about 65-70% coverage and can be easily worn as a top coat over other colors. Three thin coats is full coverage.

Now the formula on this one was different, being a flakie. It applied very easily, I used three coats for the below photo and one coat of Seche Vite. I probably should have used four coats for the photos because it looks slightly sheer under those bright lights but in person/regular lighting it looked fine at three. This is a really gorgeous and unique polish. I know it’s in the fall collection but I really think this would be great for New Years.

I also tested out using a thin layer of Moonlight as a top coat:

That’s it for today! Hope you enjoyed the photos, if you’re interested in taking a look at purchasing some, you can find her shop here and like her on facebook here.